GIP Record Massive Growth in Transactions in Half Year Performance 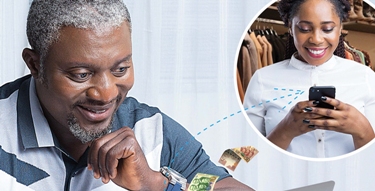 The GhIPSS Instant Pay (GIP) has recorded a massive increase in patronage in the first half of this year compared to the same period last year. The GIP is an electronic payment system that enables a customer to transfer money from one bank account to another of a different bank and the transfer is effected instantly.

The value of transaction equally shot up impressively from GH¢16.5 million to GH¢150.2 million, representing a jump of over 812 per cent.
The huge jump in volume and value of GIP transactions has been attributed to increased number of institutions offering services based GIP, following consistent public education on the product.

At the end of the first half of this year, 31 banks and 6 third party institutions had successfully integrated with the GIP platform.

Mr. Archie Hesse, Chief Executive Officer of Ghana Interbank Payment and Settlement Systems (GhIPSS), said in an interview that GhIPSS expected GIP patronage to keep going up as more banks and Fintechs integrate with the platform.

He also anticipated that banks and Fintechs will come up with more innovative services to run on the GIP platform, which he said would further increase patronage for the service. The GIP and mobile money interoperability are two electronic payment products that experts anticipate will significantly deepen financial inclusion in Ghana.

Mr. Hesse explained that because the GIP was instant and real time transfer, “it was as good as cash but even more secured”. He urged the public to continue using the GIP anytime they need to quickly move funds, since it was safer and more efficient compared to cash.

The public is able to use the GIP through the various channels including internet banking portals and mobile applications offered by banks and Fintechs. Some banks have even used the GIP platform to transfer remittances directly into the bank account of recipients, saving the customers the trouble of queuing up to receives their funds over the counter.

Fintechs have seen the power of GIP and cashing in strongly by riding on it to offer several services to their clientele.