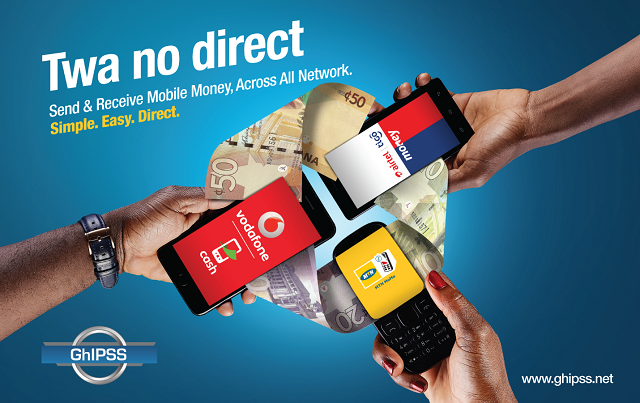 Cross-network mobile money transfers were done about 2.2 million times between May and December 2018, according to figures released by the Ghana Interbank Payment and Settlement Systems (GhIPSS).

This shows a continuous increase in patronage of the service.Before the introduction of mobile money interoperability in May last year, such cross-network transfers were done through the ‘token’ system.

The monthly average for transactions under the ‘token’ system was about 93,000. However, the average transaction per month with the introduction of mobile money interoperability for last year is pegged at about 280,000 transactions, which shows a difference of over 200 percent.

In its first month of introduction, less than 100,000 transactions took place; but this has risen steadily to over 400,000 transactions in the month of December 2018 alone.With the mobile money interoperability, customers, are now able to transfer funds from one mobile money wallet to another wallet across networks. This eliminates the previous complexities and inconveniences associated with transfers across the various networks in the country.

Mobile money interoperability has also been seen as an important vehicle for deepening financial inclusion, because it enables people who do not have bank accounts to be roped into the banking system – as any money kept on a mobile money wallet is actually held at a bank.

In the wake of mobile money interoperability, a number of institutions including Electricity Company of Ghana, Ghana Water Company, pay television channels, some fuel stations and supermarkets now accept mobile money as one of their payment options. The ‘Pay Bill’ option on mobile phones leads customers to several service providers that can be paid through mobile money.

Mr. Hesse anticipates that cross-network mobile money transactions will continue to rise in the coming months. He commended Fintechs which have developed solutions that enable supermarkets and organisations in general to receive mobile money through a shorter process.

“Paying at a shop or at a company using mobile money does not require that you go through the long process following the various prompts. Fintechs have developed shorter ways of paying, and companies should approach these Fintechs for support,” Mr. Hesse stated.

The GhIPSS CEO indicated that the future is mobile phones, and many other financial services and products will be fashioned on the mobile platform to bring greater convenience and efficiency to customers as well as the organisations themselves. He said GhIPSS will always ensure the security and sanctity of the electronic payment system.